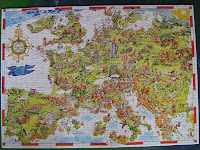 The 1000 piece jigsaw got finished in a bit of a sprint in the end - it was a tough one!
Glad to report a very good meeting with the consultant.
At the start of the meeting we were getting the same line about being reluctant (for good reasons) to give sedation but as soon as we described Tuesday we were very quickly on the same page. We all admitted things had gone wrong on Tuesday and feel on a far stronger footing. It is clear that Pads needs, and will get, sedation but that we will look to move away from that in a phased manner, with his agreement in negotiation with the play therapist. We cant do sedation for needles though - but that did not provoke such a big reaction anyway. P has been eating quite well recently, so we agreed that he may not need the tube-feed in later weeks of the cycle, so if it comes up it's not the end of the world then. But it is vital too - his weight is hovering around 31Kg but his bloods are holding up well - thanks to the nasal feed. We met one family who's child had been having up to 8 (eight) tubes a day! They were now in a better situation having had a 'peg' fitted. We have that option, although P has already said no to it, and anyway, we really feel that to go down that route would be to side-step the far bigger issue of fear. For the sake of all our longer term psychiatric health, we need to try and work through this one.
Our consultant is a really good egg - interested without being over the top, just quite ordinary really. At no point did I feel hurried along and we were able to express just whatever we wanted.
at 10:44 AM