Perhaps the exertion of yesterday took it's toll but although P tried for church a couple of times, he wasnt really up for much beyond taking it easy at home. He was very spritely in the morning: we even got as far as sitting in the pew but then he started to feel ill. We went outside with, and soon Al arrived carrying an anti-sickness tablet. Thankfully we staved off actually being ill but then his ear started to hurt so I decided to bail out completely and drive him home. With chemo next weekend we were hoping he'd be a bit more lively but there's just no accounting for what he might be like from one day to the next and we generally go with the flow. There's a fine line between 'encouraging' him to get him going (which does work occasionally) and simply adding to his sense of being unwell, thus depressing him further.
Bo has had a very happy birthday, with some lovely clothes, books and toys (not to mention the refill of Easter fayre). 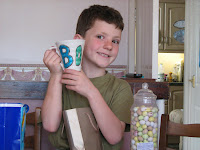 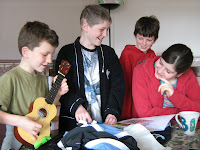 Here's them enjoying one of the books which they found hilarious. The mug was painted by Pads in one of his play therapy sessions.
at 10:23 PM