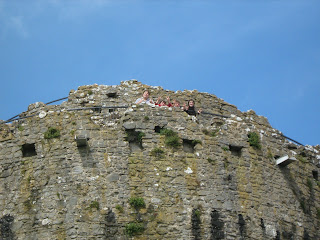 'Radio silence' is hereby broken now that we're back from Pembroke where the 'Summer Conference' happened again, but this was the last time in Pembroke as we're shifting to Cardiff in 2010, God willing.
We had a great time and Pads was generally in pretty good shape. Today he made it up the Great Keep of the Castle!

Ruth was already looking after Rhys, who is steadily improving, so, in the afternoons, she also took care of Pads when we were all out for some of the trips. The only real hiccup was his being flattened by tummy pain on Thursday. This was caused by leaving the 'tube twiddling' a day or two longer than we ought to - it starts to adhere. Not a lesson we want to repeat.
I'll get some pictures uploaded for you as soon as possible but just wanted to get things going again after the break.
at 7:27 PM