The results of the scan came through yesterday. Pads was due to visit the hospital for a pre-chemo check-up anyway. His bloods are holding up well, he's handling the temozolomide and the dose can safely increase in future if they want it to. Pads was interested to know about the scan findings. We'd looked at the pictures and there was not much change from last time, but change there was: a slight increase in the swelling. The opinion from Birmingham was that the scan was not 'classic medulloblastoma', but it did look more like tumour than radiotherapy changes. Although the 'result' sounded uncertain, so some extent, Pads symptoms have been telling their own story for some time: the consultant did not waste any words telling him. He was ok with it, and went back to playing Risk with Llyr and friends. This game was much enjoyed and had been on the bucket list for some time. However, at dinner, when his left hand was failing him with the cutlery, he became quite upset and took refuge in his room. 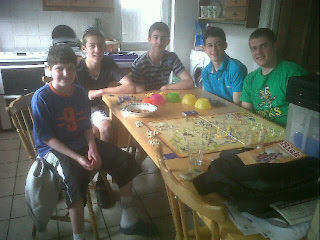 Today it was the smalls' school summer fayre and Pads managed to get there for about half an hour. For most of it he sat and did codebreakers, finding the noise and bustle wearing.
at 10:21 PM

Hi Pads
Just wnted you to knwo this. My husband has 2 brothers and between the three of them they can get quite competitive. We have a big risk game once a year- either at Christmas or New Year.....and of course the boys like to win. Well, lasy year my sis in law Dorcas won, and this year.....I won!.....and then there was a re-match...and I won again :) ha ha ha! Hope you really enjoyed your game.....(but girls rule!)