Thankfully, we've had a really good few days since I last wrote. Christmas day was busy and wonderful with three services (AM, PM and afternoon for the Welsh service) but where better to spend such an auspicious day?
For Boxing day we went to Rhys and Ruth's where the hot tub was once again greatly enjoyed. The picture was taken by someone else - Pads rarely looks as placid as that when I'm pointing a camera his way LOL! We have to be careful with Pads fentanyl patches. If they stay on in the hot water the speed of the drug being released in through the skin is increased. Also we have to re-apply the same ones after the tub and they never stick as well the second time. A few hours after coming out of the tub he was needing paracetamol. How these have any effect at all compared to the other pain relief he's on is a mystery, but they do. With the the tablets swallowed it was time to make a sharp exit and return home to fresh patches.

Yesterday I rose early to join Steve as he aimed to kayak 20 miles of the Monmouth and Brecon Canal for The Joshua Foundation. There are some pictures in this Facebook album.
Pads is spending most of each day in bed except for a couple of focussed hours. For example, he emerged on Tuesday for a family get together at Steve's where he heartily joined in with the 'Name Game' 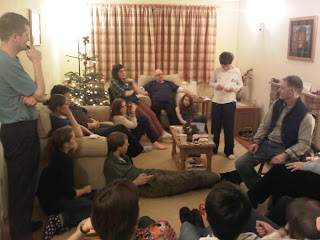 He's beginning to wonder how come he's still here, catching up with the medics and the rest of us... Harrison McKinion (via his dad's #pray4harrison Tweets) recently came to our attention and his severe and sudden illness was (at least) salutory in showing how quickly things can deteriorate.
at 9:47 PM