Pads spent the whole of yesterday in bed - not wanting to attend the clinic. It didnt matter. If the doctor wants to check him out they can pop in on their walk into work. Anyway, sans Pads allowed mum to go alone and discuss Pads' case more frankly. It has been a bit of a theme this week that people assume or project onto us that we're angry with what's happening. We've had a think about that but we really dont think we are... Even Pads himself has only very rarely, and only under the hight of duress, been known to exclaim, 'I hate this'. Fair enough. Except 'fair' is not a word people can easilly reconcile with what he's/we're going through. As it's late, can I 'refer the honourable gentleman to the reply I gave earlier'? 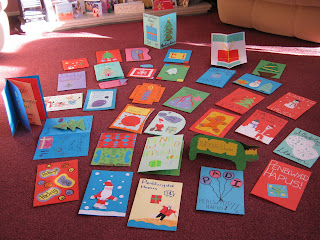 This morning a nice-looking parcel arrived from Glantaf, Pads' most recent school. Recent, but he's not been there for many months. Each of the children in his form had created a Christmas/Birthday card for him. Many of the designs were simply stunning and the level of effort involved to produce them was considerable. By Year 9, the creative talents are clearly coming to fruition!
Even though the last couple of days have been very quiet, he did not make it to either the Thursday night Welsh carol service or the Friday Night Youth Rally. He did muster the energy to visit Mr Higham who came out of hospital last Monday.. Mr Higham was delighted to see him and chatted away... including an anecdote about an unexploded bomb that showed up in his garden back in World War II.
I should have mentioned that the 'Good Gifts' site has gifts for as little as £5 if you still want to 'give' anything to Pads for his birthday... the items I mentioned the other day were each over £15.
at 10:01 PM