There are not many of these about yet, but I meant the place called 'bluebells'. We have been able to come, at fairly short notice, to the fabulous Bluebells holiday apartment, set up by Sebastian's Action Trust. The kids have been SO excited about it. The pamphlet was being gazed at regularly, not least the words, 'home cinema' and 'indoor swimming pool'. Apart from the temperatures outside, it reminded me of Give Kids the World in Florida, but, because there is less expectation that we'll go out for big theme park trips, it is more relaxing.
Although we try to avoid being away from home and traveling on a Sunday, Bluebells bookings start then and we knew the best chance we had of getting Pads in the car was early afternoon. That meant, after checking in, a drive back up to Reading to Whitely Wood Reformed Baptist Church. There was no sign of anyone, apart from an occupied parked car. A lady emerged and said that the meeting had to be moved to the other side of the M3 because of some building regs quirk. She had small children so wasnt going to the service herself but offered to drive ahead for us to follow. It was an excellent service, the sermon from Acts 4:12


Neither is there salvation in any other: for there is none other name under heaven given among men, whereby we must be saved. 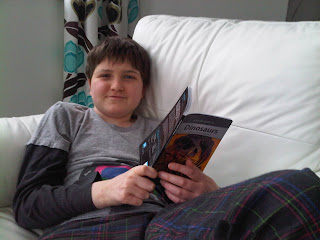 The pastor, Trevor Carlisle emphasised the last four words in terms of the necessity and certainty of being saved. The necessity because we need to be saved, and the certainty, because we are certain to be saved if we trust in/on Christ. We thoroughly enjoyed such a clear gospel message which made us feel at home, as did the people who were very welcoming. Pads even found a book that took his fancy. He's hardly even looked at a book for months, having problems concentrating and overcoming double-vision. But he's been dipping into this one. This morning he read out the following Ken Ham quote to me:

After a fairly late night, we were amazed to see Pads stagger in asking after the pool just after 9am. There was a complication which meant he had to wait... but then he spent 2.5 hours in it! This was even though the temperature was waning. They've run out of gas here - bit of an oversight (by the gas company)! The charity offered to put us up in a hotel for the night. However, we feel quite at home at these temperatures, in fact, last night we were gasping with the effects of the under-floor heating, especially Pads who overheats easily. But they were still determined to make it up to us and insisted we take a wad of cash to have a meal out!
The picture shows how big the pool is but you may also be able to see the broad grin on P's face - I've not seen him enjoy himself as much as this for a long time. 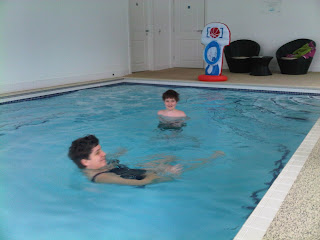