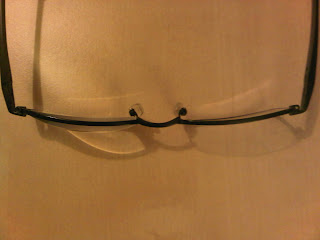 James has been a regular visitor for best part of a year. He's a psychologist and has helped Pads face up to elements of the challenge his cancer presents to daily life, a large part of which is a battle for the mind. He's managed to get another job as the term of the one which brought him to Pads drew to an end. We're sorry to lose his contribution. Thankfully Pads still has Ann, the play therapist and they go way back. It's just that James' role allowed him to be a little more challenging.
The picture is of Bo's new specs. We had a bit of a shock two weeks ago when Ally arranged an eye check-up for the kids. Bo said he couldn't read the top line with his right eye! It seems that this was never picked up, he's just been 'making do' all this time. The optician was very concerned that Bo was too old for them to be able to correct the problem. If you have or know anyone under seven, get them to have their eyes tested. You may have seen small children with a 'lazy eye' correcting patch or specs. The optician, saying that the eye nerves may have shut down completely, referred Bo to the hospital eye clinic. They came back suggesting that he tried glasses at least until he rose up the waiting list. Thick as they are, the right lens is only 80% of his prescription, so as to ease him in a bit. It is pretty challenging, but he has been brilliant about wearing the glasses. With them on he says that he can see a bit with the right eye and that's encouraging that some improvement might be made.
at 10:57 PM