Thanks Kay, Tony and Mark

Last Saturday we went for a photoshoot with Mark Cleghorn. The idea came from a corridor chat with Kay Richmond, our LATCH social worker. We were looking at the 'rogues gallery' in the hall near the front door and I was remarking on how I wanted to get a group picture of the kids but it is difficult to get them to keep a straight face. They tend to lapse into 'silly brain' mode in those circumstances, complete with tongue lolling out to one side and eyes crossing etc., etc,. Anyway, Kay said it would be easy to organise a 'shoot' through Tony Curtis, of Dreams and Wishes. You can see the results below, including some of the more goofy ones! We are very grateful to Mark, Tony and Kay for organising this, and that we were all well enough to go. We'd met Mark before as he tends to be the official photographer for trips Tony organises for the kids to visit Westminster and Highgrove. 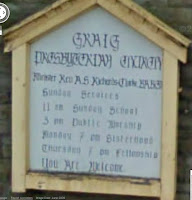 It was a little bit strange for us because the studio is in a disused Presbyterian Church of Wales. Of all of them, this is the denomination of the Welsh revivals. We still hold to their Confession of Faith. On a personal historical note, the advertised minister in the 'street view' image is Alvin Richards-Clark. He used to serve several chapels in the area where I grew up, including the Miskin Chapel next door to the family home. I was perhaps ten or a little older when he was inducted, amidst hopes he would revive the flagging fortunes of the chapel and local circuit. However, in spite of his charismatic personality, the 'liberal' doctrines (amounts to a modernistic rejection of the authenticity and authority of scripture and the supernatural in general) he held singularly failed to ignite new life (as only God can), and the Miskin chapel was closed soon after my father passed away. It was sold and became a dwelling. I can still remember Mr Richards-Clark preaching in Miskin on John 3:7 where Jesus Christ says, 'you must be born again'. It really sounded quite good for the most part but never quite got to the point of challenging us, as the Lord had done Nicodemus.
Pads is having a quiet day in bed listening to 'The Dambusters' on his i-pad. He's had some paracetamol but is otherwise happy and comfortable. This week included a trip to Cardiff Bay for bowling and pizza with some of his LATCH-sponsored Brain Tumour Support Group. Thanks to Jane, Kay and Dan for giving up their time like this.
at 7:50 PM