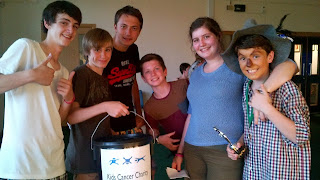 Yesterday was calmer. Padi had an increase in the midazolam dose. When we got back from Boaz's Year 6 leavers show, Padi was even trying to talk a bit. A lot of it was too faint to catch and it was not possible to get clarification. But he said, 'good night Bo' distinctly. With greater confidence that he was listening, I chose to read his favorite Psalm, the 46th, for our evening devotions to God, 'who answered me in the day of my distress, and was with me in the way which I went.' (Genesis 35:3).
Boaz played one of two scarecrows in The Wizard of Oz. He was also one of four children awarded with a trophy recognising their excellent contribution to school life right from their first year. This was the first of its kind, named after one of the parents who passed away last year, Brian Hibbard, and presented by his widow.
Three of the group of Padi's friends from his time at Mynydd Buchan were helping backstage. They are part of the group raising funds as 'Pray4Padi' and took the opportunity to shake a bucket for the Kids Cancer Charity as people left.
We've had a quiet night too. Padi's mouth breathing varies in depth and noise. He occasionally coughs strongly to clear his chest. I pop a few drops of water into his mouth with a syringe now and again and use cotton buds to line his tongue with 'oralbalance' gel.
at 6:27 AM