Just to report that, thankfully, Pads has had a calm day with just one call for breakthrough relief this morning. We've also enjoyed a calmer house, although I was out today at Boaz's final mabolgampau (sports day, in which he won 3 medals) in the morning and then the prayer meeting tonight. Pads is not able to communicate very well, has trouble finding his words, especially in finishing a sentence. This morning he was fairly insistent wanting to see Jane, the nurse, but we couldn't get out of him what he wanted her for... He asked mum 'what happens next?' Without being able to get clarification, she assumed he was referring to the progress of his disease. We've always kept him informed so she gave the explanation which the doctor gave last week, i.e. that the tumour is spreading along nerves and coverings of the brain towards the brain stem so that would likely mean he 'forgets' to breathe. His breathing in the nights is usually noisily reassuring but we turn his fan off to hear it more clearly. It's quite likely that we will not notice his passing. We were telling the other kids this at tea tonight with predictable effects.
I felt really helped by the Bible Study tonight. Mr Higham asked, 'Are you wealthy? What help is that in bereavement? The Christian has infinite resources in Jesus Christ to draw upon'. For example, Jesus said he is 'The Resurrection and the Life'. Miraculously, Jairus had his daughter raised from the dead by Jesus, only for her to die again years later. My son will rise again to live forever. It is a spiritual reality and a strong consolation. 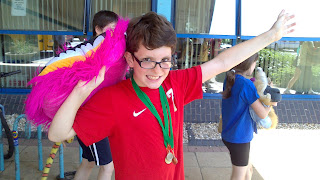 Hallelujah, what a Saviour......written through teary eyes x