We live not far from the Brecon Beacons (30 minutes drive north). They've been in the news lately with the inquest into the deaths of three soldiers. I'm on leave and took a moment to read Ceri Jackson's thoughtful and comprehensive post about it. http://www.bbc.co.uk/news/uk-wales-33506589
Two years ago, Padi fell asleep in Christ. His own brush with Pen-y-Fan's severe weather has passed into family and church folklore, it was a significant theme of the funeral sermon (View on YouTube: http://youtu.be/ypIdA9b6WDk
I shudder to think of how close to real harm we were. As can be seen from the photo, Padi was warmly wrapped and happy. As the weather came on and the situation became quite scary, I hurried Padi off to the side of the summit to relative shelter in order to change into his wellies (sorry but we were broke) and raincoat. It was as we hurried off the summit that Pads broke down in anguish and pain from the hail in his face and started reciting Psalm 46 (he'd already done that when challenged by the steep climb onto Corn Du). Our route down took us past the Tommy Jones memorial and, with the pelting rain at our backs, we descended to the safety of the Cwm and then on towards Login and somewhere to camp for the night (amongst a large group of curious and sympathetic Guides). The last 10 metres of the mountain retained a foot of snow for days after. Pen-y-Fan is really a tiny hillock in global terms, not even high enough to claim Munro status (as per the 3000 ft Scottish hill classification). But truly the weather varies in these hills and needless tragic loss of life is a regular occurrence. As hazardous as all this may have seemed, little did I know that the far more deadly threat was almost certainly already highly active within his body. This blog has not really charted the onset and diagnosis of Padi's illness, but it still amazes me that it was only a couple of months after the Pen-y-Fan adventure that he began to speak of double-vision and strange neck pains. I am so glad to have chosen him for the first of my 'quality time with dad' trips. I cannot pass the opportunity to point out that an even more deadly potential is virulently at work in each one of us as we skip or trip through the moments of our life, and that is the principle of sin. This curse has only one cure, the Gospel, the good news of God's Son coming to earth in a way that made it possible for him to be the Lamb of God that takes away the sin of the World. The World, of which we are all part, despised, rejected and slew him so that our death is swallowed up in the victory of his death and resurrection. This is the mighty foundation that enables us to meet and rebut the sorest grief.
But the tipping point for this post, apart from the other aspects mentioned already, was possibly the recent message by Jeff Gilbert (listen here: http://tabernaclecardiff.org/sermons/2015/07/12/god-in-his-church/ ). He spoke of the importance of knowing the truths we read in the Bible, but the vital importance of experiencing them too. In a familiar analogy, the Bible and its doctrines are like the map. But, according to the text, in Ephesians 3:19-21 we should know the unknowable. We must ascend, using the map, experiencing what the map has only been able to describe in two dimensions. Some religions claim that God is too high and holy for us sinners to really know. But it is one of the glories of Christianity that robustly proclaims that not only is knowing God possible, it is absolutely essential for time and eternity, for life and death. The Lord Jesus Christ died to secure this for us. Anything that stops short of securing intimacy with The Eternal Lord God Almighty Creator, Sustainer and Judge of heaven and earth is vanity, a mere playing at spirituality, however sincere, that is cut off from the Source of life and health and peace. The difference between mere religion and true religion is vibrantly depicted in the book More Than Notion, recently recommended again by Pastor Dewi. In a remarkable effort, Ally has read it into a microphone if you would like to hear it. The chapters can be taken one at a time from this link
http://tabernaclecardiff.org/sermons/category/audio-books/more-than-notion/
Or you can download the entire thing in a single zip file from this link:
https://www.dropbox.com/s/jq57ak5859hdkrr/MoreThanNotion.zip?dl=0 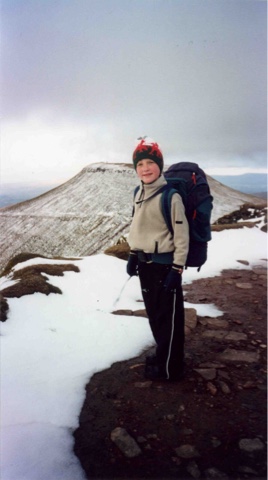 Other posts about Pen-y-Fan: http://mrmrj.blogspot.co.uk/search?q=Pen-y-fan
at 2:31 PM

I found your blog after searching for information on kefir and flax seed. The post I first read was from 2011, so was quite sad to then read the most recent post on your blog, discovering that your son had gone to be with Jesus. Your family's faith is evidently very strong, a necessity for such life experiences. My own son, Nathan, died some years ago at age 24 in a drowning accident. Hope in Christ carried me through, although the pathway through grief must still be travelled.
I just wanted to encourage you with your writing, you touched my heart.
May God bless your work,
Regards
Fiona (Australia)