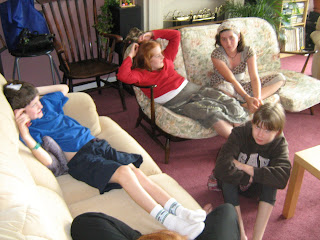 So Pads wanted to go to church this morning, and, although he didnt make it to Sunday School or the evening service, in many ways it was a fairly usual sort of Sunday, with 15 for lunch and afternoon tea. This is him being tended by three cousins and sister. He had plenty of opportunity to catch his breath during the day but didnt spend much of it sleeping. I played him at chess and then my sister arrived with a get well card kindly signed by many of the Ospreys players, this followed the picture my other sister got at the Monmouth Show last week (signed by the likes of Neil Jenkins). He is still pretty gutted about not being able to play rugby for a year but I clarified that it was only the full-contact version that they play in his school that was outlawed. The consultant even said he could do Taikwondo if he wears a helmet (this has been revised following the diagnosis such that they dont really want him involved in contact sports)!
While with mum he was gathering his thoughts about what has hit him over the last week or so. Some of it happened so fast... For example, Wednesday 20th August: one moment he was being told he'd have a scan the next day, the next thing he knew he'd had the scan and was being lined up for surgery that very night! This after 14 doctors had examined him and given their opinion that it was 'muscular skeletal'. We do not hold anything against them because the vital symptom of raised pressure behind the eyes was checked but fluctuated, making it hard to spot.
Anyway, now we're approaching the full diagnosis after the consultants meet tomorrow. We may not hear their opinion until the afternoon but, as soon as we do, I'll post a 'tweet' about it so keep an eye on the posts below my photo on the left or look on http://twitter.com/agentjohnson which I can send to from my mobile.
at 10:25 PM