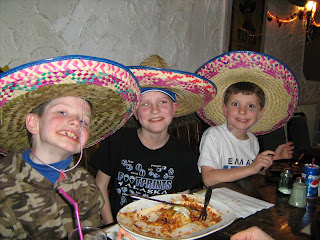 Pads has been enjoying being in school - mainly. Today a teacher didnt recognise him and implied that he shouldnt be wearing his hat indoors. Some annoying kid is pulling his hat's dangly bits and claiming to be 'pulling his hair'. Apart from that he's in pretty good shape. This is in spite of quite a late night when we went to Pepe's (_so_ tasty, but wouldnt be hot enough for Schroeder) and having walked to school this morning. This is more like it.
Spare a thought though for www.phoebemacaskill.com In Pads' case, the tumour showed up in his skull which meant that it couldnt grow much without really squashing things and thus the symptoms flagged it up fairly early. This has meant that the spread and consequent treatment is a lot less than for Phoebe. Pads also has age on his side in terms of the radiotherapy. With Phoebe being so much younger, so much more of her is growing like crazy than with Pads and the related side effects will be less for him.
at 6:36 PM

lovely to see you having some "normal" activity - poor phoebe!