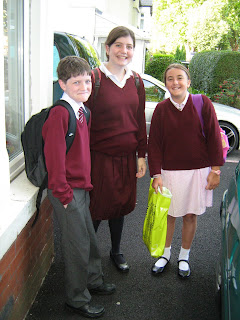 Overall Pads enjoyed his first day - it didnt start very well because this was the first morning rush he's had to face in a good while and those going to Machen have to leave quite a bit earlier than those going to Whitchurch Road. The clouds gathered in earnest when at school and he ended up with the Head and Moli trying to get him back together - glass was half empty in many respects. The Head was quite surprised at how eloquent P can be when he's upset - reeling off one thing after another that was wrong with the world. I was just happy that the phone-call was just to advise me about it and not to say he was giving up for the day. By home time he was ready to affirm that the people there are very kind and he was looking forward to going back tomorrow. He put the upset mainly down to a bad night's sleep - perhaps most other children on their first day in high-school could say as much. But this was far more significant than average, as you can appreciate. Most of the hard things that P has had to go through over the last year have been 'off the scale'. He's got to learn to face challenges that look threatening but actually he's well able to see them off without a panic. It's partly a sheer confidence thing. I hope that the switch to carbo-platin, with its reduced side-effects, has come at just the right time so that he's able to get more school than on cisplatin. In any case, the next cycle doesn't start until Friday after next, so, all being well, he could get just over a week of school in before chemo kicks in.
at 9:47 PM