Getting about a bit more 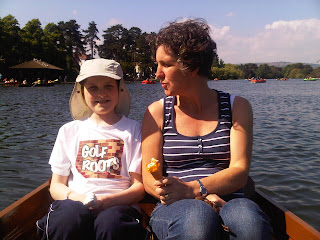 It was hard work waiting this morning for the medics to phone us today. We were supposed to be finding out a bit more of 'what next'. The whole situation can feel quite draining, physically, mentally and motivationally. But we eventually decided to get out and deliver our alotted invites to the annual Summer Conference, being held in Cardiff for the first time this year.
The phone call came after lunch and, in the event, it was brief:
Meanwhile, Pads has had a good day. Although by 9pm he was asking for pain relief, really he's not needed very much at all. This was in spite of quite a bit of activity after a slow start. He and Moli enjoyed a visit from Reuben and then we went to Roath Park for an ice cream and a row. After that we went to friends for tea and Pads enjoyed playing on their wii for quite a while.
Many of those who prayed audibly in the meeting tonight mentioned Pads although another older friend, Harold, is just starting an agressive regime of chemo, also for a brain tumour.
We regularly hear of other congregations adding their voices to a veritable chorus of prayer. Today we were assured of petitions from Ireland, Inverness, Swansea and Barnstaple.