To Velindre for an MRI

Pads wasnt up to much on Sunday. He tried to come out but we had to abort and settle for an even quieter day than initially planned. Monday passed reasonably without incident. Today, After an uneventful visit to the ward to give a sample of blood and see the consultant, it was off to see another one: the consultant who handles the radiotherapy, 'Any questions for me?' he asked, 'Can we go now?'
Pads has seen it all before and rarely wants to know more than he needs to for the immediate future anyway. It is easy to assume that P is simply being a cheesed off teenager, but generally he's just being his normal placid self. He was slightly alarmed at the idea of part of his brain being thoroughly zapped. But the consultant is still writing sentences with the word 'cure' in them, i.e. on the consent form that Pads is old enough to sign now, along with a parent. 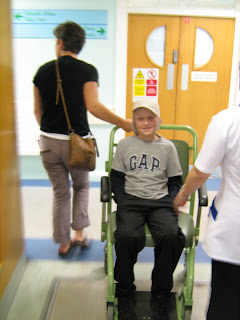 The type of radiotherapy is called 'stereotactic'. There will only be 4 doses, instead of the three weeks we had been formerly advised. This short treatment should entail far less side-effects and it's on a 'forgiving' area of the brain, as evidenced by the negligable impact two lots of brain surgery has had. The idea is to zap a very precisely defined area, the site of the previous tumour. Today's scan, an MRI, was intended to inform that targetting. It's a noisy machine, but thankfully did not take too long today... possibly 30 minutes in total: not quite long enough for his claustrophobia to kick in. The worst bit was having a needle to inject dye - no amount of these can make them easier.
We had a chat with a number of radiotherapists, especially the one who was explaining how his mask is going to be made tomorrow. There was the usual head scratching, trying to think of a suitable treat, or something he was 'into'... in the end I suggested a comic, so we'll see whether that fits the bill tomorrow. She wanted to know what his tactic was for keeping still in the MRI, but he was unable to verbalise it, he just seems to relax and endure.
The picture is Pads being towed on one of the quirky Velindre wheelchairs. The 'steering' wheels are at the back so making them as awkward as a shopping trolley to push.
at 7:58 PM