Pads is still wearing his Ellen MacArthur tee-shirt. He had a really great time, we are so glad he was able to go and to stay. He was surprised at how nice all the people were and is in contact with one of the 'crew' via facebook. We're a bit slim on photos because Pads was nervous about using his digital camera and he lost the single-use film camera he was given. Anyway, we're told that some photos are likely to appear on the charity's facebook page. Until then, if you want to see the kind of thing they get up to and the yachts they use, have a look at: http://www.facebook.com/EllenMacArthurCancerTrust 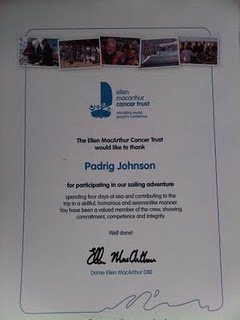 Pads had the ample fore-peak cabin to himself which meant he could go and have a rest at any time. He was surprised at how much strength he had and he never needed to resort to that. In fact he only once needed additional pain relief, two paracetamol, in addition to the fentanyl patch. He went to bed early at 7pm the Monday night but was unable to sleep: the others were crabbing and he caught a huge single-clawed one.
They were blessed with fair weather. Pads was steering when they were in full sail hitting almost 9 knots. At Yarmoth they went ashore for donuts at the Royal Solent Yacht Club and a game of rounders nearby. They sailed on within sight of the Needles before turning back.
It was very memorable when the group were recalling their funniest moments of the trip. Dan had remarked how he thought the cabin bunks made the space like a grotto, and Pads chimed in that Santa is not bald and does not have a red beard. As the laughter was peaking, Dame Ellen, plus her (really nice) border collie called Norman, sneaked in and sat next to Pads. He was impressed at how 'normal' she was and remembered to bag an autograph for Rhys. Although he left that behind, thankfully the team sent it and his certificate on in the post.
Back home, Pads is back on the codebreakers and enjoying playing with the dogs Jack and Moses.
at 8:42 PM