Blast from the past

I was working this morning next to Pads who was awake and bright fairly early. He spent a while just staring and thinking... about his calendar, about how he cant wink with his right eye... At about 10:30am he seemed to be struggling a bit and was getting annoyed that he could not see his DS well without squinting: there was a blockage over the centre of his right eye. He'd also just asked for some pain killers, for neck pain and some in his left temple. I called Ally and she contacted the medical team. They wanted to see him. It was a lovely day of weather and so the best thing was to wheel him over the park and into 'Day Beds'. The consultant recommended he visit the Eye Clinic and lined up a CT scan. Pads was very brave for the canulation and dye injection. We were keen to get Pads seen today was because all of this would have been less straightforward on the weekend, and we wanted to avert a wide-if-bleary-eyed dash to the hospital in the early hours, if something could be done to prevent it. These investigations took up most of the afternoon: but, by 4.30pm the scan images and report from the eye clinic confirmed that there was no sign that increased pressure was the cause of the earlier symptoms. Of course we were remembering back in pre-diagnosis days when symptoms would come and go, but we're in very different situation now, even if some of the territory feels the same.
Thankfully, Ally has been recovering from the shingles attack a little more as the week has progressed. I'm hoping today's events wont have set her back. 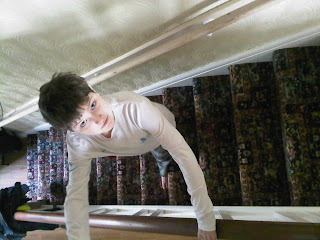 The picture was taken yesterday after we had a rail fitted to the stairs that morning which helps Pads to move more safely down them. An occupational therapist had visited and recommended a number of these adjustments since his left side is not so good. It was great that he got out last night to the Preaching Ralley. He was in very good form and very deliberate in thanking Mr Densham for his sermon, and it was excellent - a clear gospel message, calling sinners to repent and believe. I felt bad for him afterwards as he'd innocently asked Pads what he'd done to need a crutch - P informed him then about the tumour.
at 11:00 PM