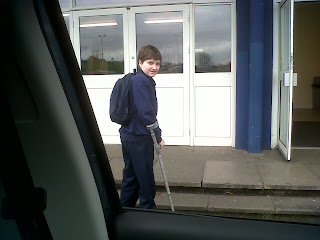 Pads is getting more confident about going into school. On Tuesday he did not want mum to even see him go in. The first word that he uses to describe it whenever I ask how it went is, 'Great!'. A few weeks ago he was waiting with a different friend than usual because the normal one was at Latin. When mum suggested this sounded rather clever, Pads mused that he would probably have been doing Latin as well but he 'did cancer instead', and proceed to 'laugh like a drain'! I think you had to 'be there'...

We've been focusing on BBC Children in Need over the last couple of days. Bo was singing in a thousand-strong children's choir at the Cardiff International Arena on Friday night. That evening's first Children in Need episode featured Padi's play therapist, Anne, from the Kids Cancer Charity. You can see a feature about one of the other children and the help she was at 47::40 on i-Player until next Friday. The feature quoted her time at £50 per hour and Pads has had very many of those over the last four years. Ally's met the mum of the little girl in the Children in Need feature at a 'pamper day' organised by LATCH.
Apart from the 'sufferers' support group Pads goes to, LATCH also organise 'Brain Tumour Support Group' meetings for the carers in the evenings every so often, these may feature talks by our consultants. The question and answer sessions at the end are an excellent forum for all in attendance, i.e. including whatever members of the multi-disciplinary care team that attend. Many carers were talking of their bad experiences with being brushed off by clinicians when trying to get a diagnosis, even when faced with far more obvious symptoms than Pads presented. The basic message is that probably you know your child better than any physician and you can get a sense when things are 'not right'. You also need to recognise when your reasons for suggesting the child gets a scan are unreasonably dismissed in spite of the status and position of the person getting in the way. Parents have even been referred for counseling because of their persistence. All the while, delay increases the risk that the pressure will cause 'brain herniation' or tumour metastasis (spread).
All that talk takes us right back to the start of Pads' illness. Our story is quite different these days. We now seem to be in the arena of 'long-term' side effects: our ears pricking up when the consultant mentioned radiotherapy-induced curvature of the spine. I couldnt recall hearing that one before but giving consent to something like radiotherapy can do funny things to your memory. After the talk, Ally asked the consultant straight, 'So is Padi an "outlier"?' (i.e. is the length of his survival rare). She confirmed that he is. We are all grateful for this of course, but there is no getting away from the fact that he is still ill. Today he did not emerge from his bed until 6pm, when the chip buyers returned with a small battered sausage for him. This he duly  devoured but it wasn't long before he was heading back up the stairs feeling dizzy and exhausted.
at 10:18 PM