Back from Bluebells again 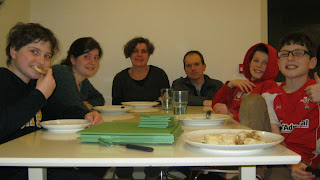 After weeks of anticipation we returned from Bluebells again having had a great time. The 'smalls' enjoyed the pool and the games/cinema room immensely, as well as spending a while making things out of plasticine with an art therapist that'd been laid on. Asher made a model of Julius Campbell from 'Remember the Titans', a favorite film! Another highlight was a gift from the charity that runs the house, Sebastian's Action Trust, to get a slap-up Chinese takeaway meal. Moli kept plugging away gamely at her GCSE work.
We were there just 3 nights but it felt like a good break. Pads spent a lot of time in bed but emerged to hang out with us, mostly in the evenings. He was especially busy on Tuesday, taking the offer of a massage and having a swim in the 'cool tub', as he calls it - the indoor swimming pool. It was great to receive visits from Ally's side of the family who live in the South East. Apart from tiredness, the only other symptom troubling him was feeling dizzy, which he often gets from standing too quickly. Generally he's able to recover but yesterday he really lost his balance, and only a reflex swooping move by mum prevented a nasty 'face plant'.
at 11:34 PM