When Pads heard that Pastor Bob Dickie was visiting the UK, he sent him a message on Facebook to request a personal meeting and yesterday that took place. Here is a link to Pastor Bob's YouTube channel. He brought Pastor Bill Tipton up to see Pads and shared Hebrews 13:5


for he hath said, I will never leave thee, nor forsake thee.

It was lovely also when Pastor Bob prayed that the room would become a 'Bethel' to Padi - Bethel means 'house of God', a reference to Genesis 28 where Jacob is awestruck awakening from a dream about a ladder up to heaven, with the Lord standing above it pronouncing His Name and renewing Abraham and Isaac's covenant with him.
Many people do not really know what to say when they visit Pads but he deeply appreciates a 'hearty meal' of divine grace and these good men know how to serve it up with no flannel or messing around. In turn, they were greatly moved and blessed for the opportunity to minister in this way.
It was a delight to have three American pastors speaking yesterday (am, doctrine class, pm), as well as a combined after-meeting which Padi caught via the live streaming. He'd learnt that the syringe driver was no obstacle to his leaving the house but it became apparent also that leaving the house at all is looking increasingly unlikely as simply too demanding. I arrived back just in time to greet the guys, from taking Asher to a hockey match. In the afternoon the other children went across to help make a film about LATCH with Pads' brain tumour support group. Pads was not able to help this time.
The morphine is doing it's job in the main. He just needed the occasional break-through dose.
Thankfully the nights have not been too disturbed recently which is just as well given that today has been pretty full-on too, with many visitors and, at last, the hospital bed which is going to make caring for him a lot easier. If you are feeling you would like to visit Padi, get in touch soon. 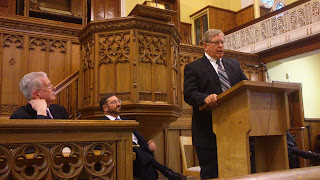