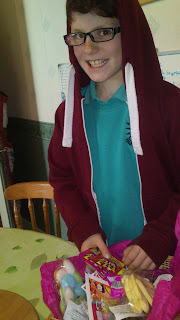 While there are very profound things afoot in our home, there are also a number of funny moments which give the contrast. Cleo is pretty hilarious, when she's not trying to scale the garden walls. I captured a short video of her 'performing' yesterday. I took the liberty of adding a little 'disco' which makes it seem like she's using a workout video.
This morning a surprise arrived from friends overseas wanting to cheer us up. It worked! The biggest smile of the day so far goes to Boaz who got to open a hamper full of 'retro' sweets:

Another source of fascination/distraction has been our 'pet' tadpoles. This morning we noticed one of the really small ones has front legs now, as well as spindly back ones. As per instructions available on the Web, we've reared them on rainwater and boiled lettuce. To read more, this link goes to a video of them on Google +.
Pads has had a very quiet night. I could hardly rouse him at all this morning for his early medication - it feels like torture getting him to take these tablets when he's so deeply asleep. We give what we can through the PEG tube but mostly he has to wake up enough to swallow at least 4 tablets with one gulp. The usual incentive is a cup of fresh water after a night of mouth breathing. But I had to resort to playing something on YouTube before he came-to enough. A few days of being quite awake during the day have caught up on him. Also, the new bed is fantastically comfy and does not crackle like the mattress topper he'd been lying on over the weekend.