We had a torrid time a couple of weeks ago trying to keep Pads pain under control and eventually moved to the syringe driver as opposed to fentanyl patches. This move was foreseen and something of a Rubicon in everyone's minds, not least Padi's. He worried that the device would hamper his movements. In fact he has continued to be able to enjoy the things he did before and he has mentioned wanting to do more. Quite how that could turn out is hard to picture, but he did get to church on Sunday night and was in the tub on Monday. 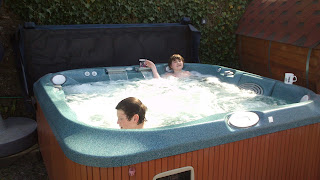 People who are very ill often 'come and go', to the astonishment of those caring for them or looking on. He had a lovely letter from the the Head of Year 10 and SENCO yesterday. He'd already mentioned school earlier this week; last night he descended the stairs with the express intention of using the Wii-Fit game (involves standing on a 'balance board'). This turned into a less improbable Wii Sports Resort session with Asher. Ross and Amy arrived from Scotland having been briefed by Rhys on the way from the airport not to expect too much and imagine their surprise when their first sight of Pads was of him doing something completely normal!
It is certainly typical of Pads who, over the last five years, has seemed to be spiralling downwards only to level off and continue on that plane for a while. Who are we to stymie his ambitions?
at 11:33 PM