No chapel last night for Pads - lacking 'oomph' at the critical moment. He's mainly comfortable although has hardly been out of his room since last Monday. 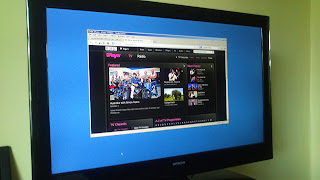 LATCH have done it again! Pads now has a 32" telly - modest (by today's standards) and yet adequate for shared viewing of all kinds of things, whether it's photos, a movie, or BBC i-player. There's a great new series on at the moment about Australia, somewhere that's always fascinated Pads. The other day the boys were having great fun watching some old home video together, like this one from 2006:

They had to break off a 'Les Mis' session on Friday though as Pads quickly tires after 8pm and he was getting some strange pains which we're now putting down to long term steroid use, manifests as a kind of reflux. So we're breaking up Pads' tea drinking with some milkshake and an increase in the omeprazole dose.
at 6:40 PM