The night was again fairly calm and today has been a lot better than yesterday in terms of Padi's pain. There is an increase in his medication (adding ketamine and increasing medazolam) but the main thing that's causing his semi-conscious state is tumour activity. We have a picture of spread along nerve coverings rather than a mass anywhere very specific. He had two hits of breakthough pain: 7am and then at just after 12 noon. At one point he yelped and I sprung up to ask what was the matter but he couldnt tell me. People who have not seen him since last Friday are getting a bit of a shock at how unresponsive he is.
I took the opportunity to take the smalls and a friend off to Southerndown for a dip. It was good to get out with the boys, not least because Bo's had some treatment on his eye that was pretty challenging. A probe was used to perforate a tear duct membrane that's outstayed its welcome from birth. Thankfully the opthamologist held back from doing the other eye without a GA, one was quite enough! 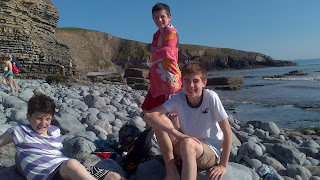