It's been another big day. Pads had 11 (eleven) breakthrough events and 15 Glantafians visiting (including two teachers). Apparently the Head paid for taxi's for them to visit in school time, bringing a massive poster signed by the whole of Year 10. It was very moving for all concerned but a very still Padi, wearing his wet flannel blindfold, could only manage a hand-shake with each student as they left. Asher got very excited when he heard that @BrianODriscoll and a whole load of other Lions were following the @Pray4Padi Twitter feed, but sadly that's just who it's following :) 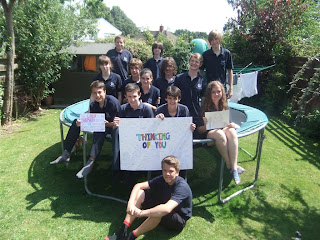 We were once again indebted to the nursing staff today who, amongst other things, brought a massive sharps bin big enough to bury both dogs in (says Al) and called in the consultant again, actually drove him from a conference to our home to speak with us for an hour. This amount of pain was not at all what we were expecting of palliative care and it was a relief, the driver having gone up to 1350mg at 6pm, a massive dose, that Pads seemed more comfortable by 8:30pm when he wanted to settle down for the night. 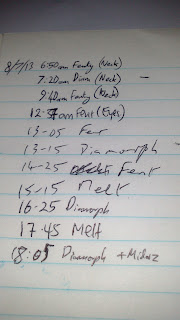