Our 19th wedding anniversary has sped by. We had a lovely day. It started with a 'hit and run' visit to our chosen purveyor of memorials, Ash. We were delighted with their service. I wont forget seeing the list of suggestions for things to put on a memorial though - many were sublime. In the end we made the basic decisions so that a stone could be ordered and we could decide on an inscription later. One of the requirements for a grave stone, even one set on top of a thick concrete pathway, is to secure it by means of a 'ground anchor'. The stone has to be secure enough so that it could not be moved by 'two grown men'. Thus a large steel rod is needed to go down into the ground and up inside the stone. This sounds pretty impressive. After all, a memorial should stay put for many centuries, one might expect. Then I got to thinking about it and actually what have we got there...? A stone of a few kilos, certainly not tonnes. It's fixed to a line of concrete upon the surface of the planet. As you know, this thin surface crust is floating on a huge sea of floating magma on a planet spinning around a relatively tiny star. How permanent really is any thing planted on the face of the earth? We need an anchor that lodges somewhere out of reach of 'change and decay'.


We have an anchor that keeps the soul, steadfast and sure while the billows roll. Fastened to the Rock which cannot move, grounded firm and deep in the Saviour's love.  Owens

As Alex pointed out at Friday Fellowship, all cultures have always believed in an afterlife, from the ancient Egyptians to even some modern atheists. One overwhelming message from this observation is that what we can see and feel is less permanent than what we cannot, i.e. the soul. And yet such scant attention is given to preparing the soul for this great transition of death. Interestingly, all cultures have also always believed in a judgement after death, the results of which, usually depending on how good you were, determine how you will spend eternity. With the clear testimony of revelation, we can, we must make sure of the outcome of this judgement before it happens. Make peace with your Maker now, while the offer stands: For whosoever shall call upon the name of the Lord shall be saved (Romans 10:13).
In case you're wondering, we decided on the following inscription:

Er Cof Annwyl Am
Padrig Luc Johnson
19th December 1997 – 21st July 2013
But now in Christ Jesus ye who sometimes were far off are made nigh by the blood of Christ. Ephesians 2:13
The first line is Welsh for 'In memory of beloved...'
In case you're also wondering, I'd taken the day off for our anniversary and so we went on from Ash memorials to have a great time at the superb Tuesday morning fellowship meeting. It was wonderful to go over some of the points that had come up in the Lord's Day services and enjoy fellowship with God's people. Then we went for a fine lunch with an excellent view at the New House Country hotel. 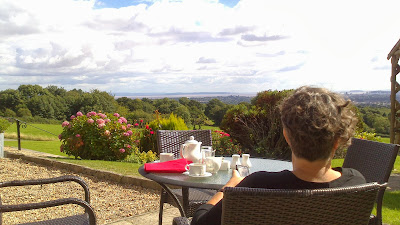