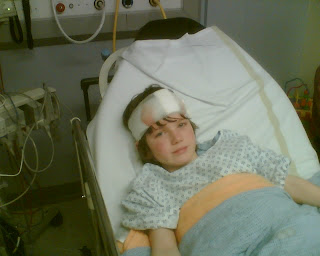 Today it was Asher's turn in the medical spotlight - he'd cut his head in a school swimming lesson. At 11 am I had a call to meet him at A&E, just a stone's throw away from where I was in my office. He duely arrived, looking rather cold on the trolley - he really does like to be cosy and all he had on was some damp bathers underneath some measly NHS 'blankets'. You can just imagine him though, using flippers and being told to go as fast as he could, tearing through the water until scraping/colliding with the steps. We need to get him some goggles that he's comfortable with!
Asher was very brave indeed for all the cleaning torture, then they glued the cut together.
Meanwhile, Pads, who'd had a fairly mundane day, is slightly miffed that, after all he's been through, Ash is still the only one in the family to have had a ride in an ambulance (although it should be noted that neither siren nor lights were employed). I suppose it sortof makes up for Pad's various rugby-related trips on Friday and Saturday.
at 9:13 PM

hope it heals soon and is not too sore