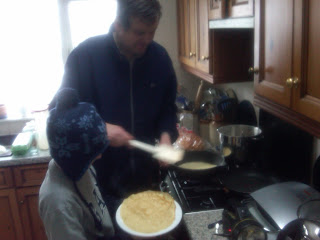 The snow fell hard and fast last night and so school was cancelled for M and P, but the small boys' school held out. They didnt seem to spend much of the day on actual school work but reckoned they had more fun there than they would have at home. This was just as well because they were thoroughly gutted to be heading off this morning. The 'bigs' school phoned at 7:30am to confirm they were inaccessible. This gave Pads especially an important breather after two days of 'reality'. Yesterday he was close to tears for nearly and hour, from 6:45 when his feed pump woke him up, to 7:45 when he was limply dressed and almost ready for school. The children usually walk up a steep hill on Tuesdays and Pads is in no shape to cope with it, even with one of the staff carrying his bag, although he soldiered on. In another phone call today they said they'd be arranging a car for him in future. It was reassuring that they'd reflected on it and were putting something in place. He's still on codeine and sometimes paracetamol for the pain in his PEG site, although the wound itself is continuing to respond encouragingly to the treatment (which adds to the faff first thing in the morning). But he continues to eat a small amount - today's treat was seeing him have a nibble at 'snow pancakes', courtesy of Neil, a delicacy fondly remembered from my youth.
at 10:48 PM