Pads had a fairly uneventful week... until Wednesday. He'd enjoyed 'Toddlers at Tabernacle' again. Afterwards, Mr Higham was in two minds about whether to go out for lunch. As he tried to sit down again, the office chair had rolled backwards and so he ended up on the floor. A rapid response paramedic arrived to assess the situation but there was nothing for it but to take Mr Higham to casualty by ambulance, which took another 40 minutes to come. While he was waiting he was in quite a lot of pain and feeling very frustrated and worried about Mrs Higham, ill at home. A number of church members were waiting with him and trying to reassure him, Padi amongst them. Pads did not like to see Mr Higham so anxious and eventually said, 'With all due respect, the One who is looking after you, will look after her too.' The room fell silent.
At hospital, the X-ray's revealed a fractured hip which meant only one solution: a routine hip replacement. This was carried out on sucessfully on Thursday afternoon. The picture below is of Padi visiting Mr Higham yesterday afternoon - they are very close friends. 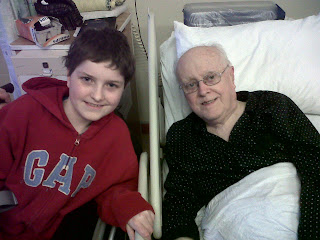 The boy continues to teach us about our God. He is amazing and so is Pad