With apologies for delays in getting this published, here's the artwork from Pod Clare's latest visit. This time it's some pyrography featuring our two lovely mutts - Moses and Jack. The picture is made by burning marks into wood with a hot stylus - great fun! 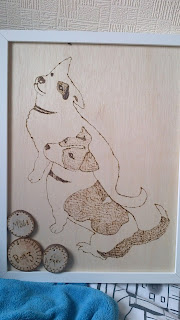 We've been finding things tough lately, it has to be said. I've just come to the end of my 5th week on sick leave due to stress. This is related to a troublesome meeting which questioned my role in work. It has dominated my thinking the whole time I've been off. Occupational health have said that there must be another meeting before I can expect to get better but the prospect of the meeting is also not exactly healthful with the week we've just had so I am going to call it off for now.
Last Monday we were told that Pads' chemo was ceasing. This is the temozolomide which we are led to believe has helped to hold the tumour at bay since last summer. Pads has had 14 cycles and that was all he would have: was the message which seemed to come 'out of the blue' . We had come to believe that this chemo would carry on indefinitely since Pads had agreed to carry on taking it. It felt like a light had been switched off unexpectedly.
Thankfully, our consultant was able to fit in a meeting yesterday to explain things. Temozolomide is a cytotoxic drug that kills cancer cells but after a while resistance is built up, so it is used for a finite period of around 12 months as its not believed to give benefit beyond that. The fact that Pads is not going to be on it for the Ellen McArthur trip means he should be in better shape and have a better experience without any of its side-effects. They are proposing to scan him in the early autumn, and prescribe if necessary another chemo tablet, etoposide, it is a little more toxic to the bone marrow than Temozolamide, which Pads has tolerated fantastically. Meanwhile Pads seems to have accepted our explanation of the drug being stopped quite calmly.
Considering all this, we are mindful of our own human frailty and mortality, and the sheer pointlessness of life without God. The splendour of what awaits us who've trusted in Christ makes this life seem like knocking about in a dimly lit broom closet.
at 11:15 PM