Pads' birthday on Wednesday got off to a slow start with there being little chance of his siblings seeing him before they left for school so we reserved celebrations for afterwards. Llŷr wanted to take him to the Hobbit and we hit on the afternoon of the 19th. In fact, ever since it's been on the 'radar', he's been hoping to see it, but when the release dates of the three films (a year apart starting late 2012) were announced it seemed unlikely and we felt a little aggrieved by the delay. We're through his birthday and at least one of the Hobbit mileposts; these events seem so large and real as we're given to approach and experience them, and then they fade into fragments of memory.


Fading is the worldling's pleasure,
All his boasted pomp and show:
Solid joys and lasting treasure,
None but Zion's children know.
John Newton

How transient life is! Pads courage has been challenged again this week by starting a new course of chemotherapy designed to give symptomatic relief. There is a slight risk that it will affect his hair. Thankfully he's willing to trust the medics and 'just gets on with it', where 'it' includes swallowing really big tablets that have to be handled wearing a protective glove - the drug is etoposide.
For someone with particular requirements, the best idea for a present for Pads was a new Nintendo 3D games console - he did not know what to say. The chance of having a turn on this might encourage Boaz to work hard at wearing his patch (as he can has only been able to see in two dimensions). Bo's taken the original DS into school of 'toy day' today, his last at primary school! It's been very hard to find the slots and we certainly do not always succeed with that, but there are hints that the vision in his right eye is slightly improved. He's always supposed to be wearing his glasses, but they went missing for the Christmas Service last week. He did a great job of singing and is justifiably proud of the projected picture that he drew, it happened to be up at the same time as his slot on stage. 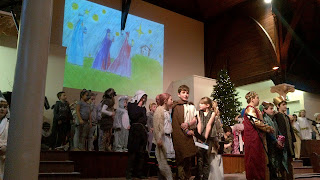 We've always been pleased that the school tries hard to represent the true meaning of Christmas. So many others we hear of have mini pantomimes about 'the lost star' or 'the lonely Christmas tree' and avoid any reference to the historical and momentous fact of the incarnation.
at 2:10 PM