Today Pads was quite distressed by double vision but because we're so close to the hospital we were able to hastily arrange an appointment with the orthoptic eye clinic. This is the same place that's treating Bo. They're confident it is nothing other than the eyes getting tired, swinging the eyes away from a central focus. He could try patching one eye or perhaps fit a prism to spectacles in one eye. This would help the eyes not have to work so hard to keep a single image.
He has also had 6 doses of breakthrough pain relief today - the first at 4:20am. It was hard to work out whether his slurring of speech was because he had melts under his tongue or because of the opiates. It is thought this is because the steroid dose has been reduced too far. So, as of this afternoon, he's back up to 1mg/2.5ml twice a day.
Moli's not been very well either - they're going to do a virology blood test and have prescribed iron.
Last weekend we were able to spend my Christmas present of two nights in Llangynidr. We traveled over on Friday night, Ally having dispatched Pads to Ruth and sorted out the others too. It was quite an undertaking and we're very grateful for all the help with arranging it. The consultant thought this was a great idea, just the two of us, saying that the time ahead would be a bit of a marathon. After wandering around the charity shops of Crickhowel, we ignored the hill fog and climbed Craig y Fan Ddu, en route to Fan y Bîg. It was quite a contrast to the last time I was up there: 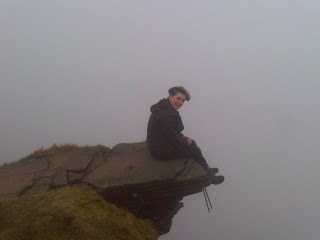 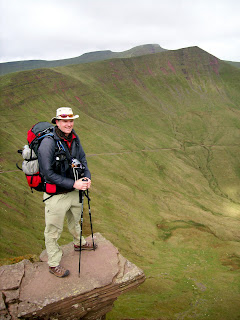